Samuel Okudzeto Ablakwa, the Member of Parliament for North Tongu has made some explosive allegations against Reverend Kusi Boateng who is the Secretary to the National Cathedral Board.

In an earlier revelation about the National Cathedral, Okudzeto Ablakwa revealed that a whopping GH¢2.6 million was dished out to a company named JNS Talent Centre Limited.

Ablakwa’s investigations into the alleged payment led to the discovery of one Kwabena Adu Gyamfi as a director of JNS Talent Centre.

Having confirmed the identities of two out of three directors of the centre, Ablakwa went on an expedition to discover the identity of the third director, Kwabena Adu Gyamfi.

In an explosive set of allegations which he describes as the Tsar Bomba of all scandals, Ablakwa claimed that Reverend Kusi Boateng holds multiple passports and identification cards with some bearing the name Kwabena Adu Gyamfi.

“I am now able to reveal the true identity of this mystery director of JNS, Kwabena Adu Gyamfi.

“Definitely, the code has finally been cracked and it shocks to the marrow!

“Unimpeachable and incontrovertible evidence confirms that Mr. Kwabena Adu Gyamfi is the famous Rev. Victor Kusi Boateng who still serves on the National Cathedral Board as an Executive Council Member/Director.

“Rev. Victor Kusi-Boateng AKA Kwabena Adu Gyamfi thought he had outwitted every Ghanaian, particularly our authorities whom he dribbled for many years; but the day of reckoning is finally here.

“From unassailable and irreproachable documents in my possession, Rev. Victor Kusi-Boateng AKA Kwabena Adu Gyamfi uses multiple passports and multiple identification cards with different names and different dates of birth as his special modus operandi,” he wrote on Facebook.

“When JNS Talent Centre Limited was being incorporated, he submitted a passport with the name Kwabena Adu Gyamfi. The passport’s number is G0886001. At the time, he claimed his date of birth was 30th December, 1969.

Ablakwa is therefore demanding the immediate resignation of Reverend Kusi Boateng from the National Cathedral board and his prosecution.

Under the sub-topic ‘demand’ in his post, Okudzeto Ablakwa wrote “1. The immediate resignation of Rev. Victor Kusi-Boateng AKA Kwabena Adu Gyamfi from the Board of the National Cathedral of Ghana;

“2. Rev. Victor Adu Gyamfi AKA Kwabena Adu Gyamfi must be compelled to refund all taxpayer funds diverted into his company, JNS;

“3. Rev. Victor Adu Gyamfi AKA Kwabena Adu Gyamfi must be subjected to thorough credible investigations and prosecution for his many other offenses which have now come to light.” 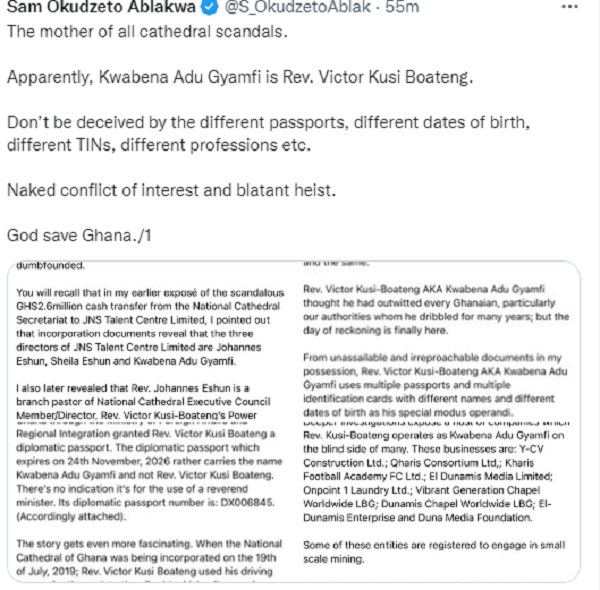 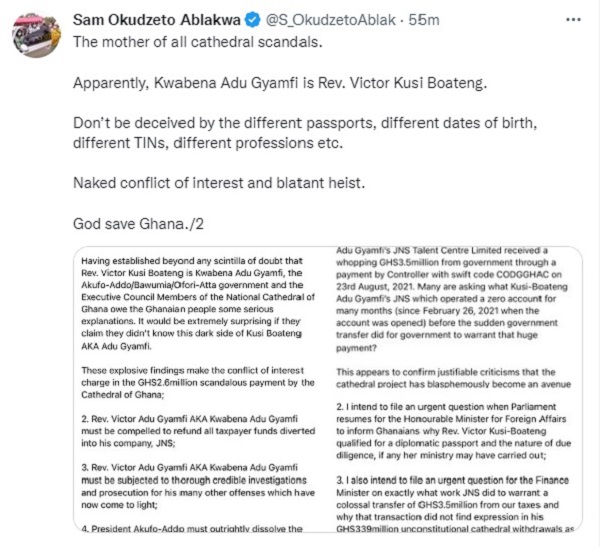 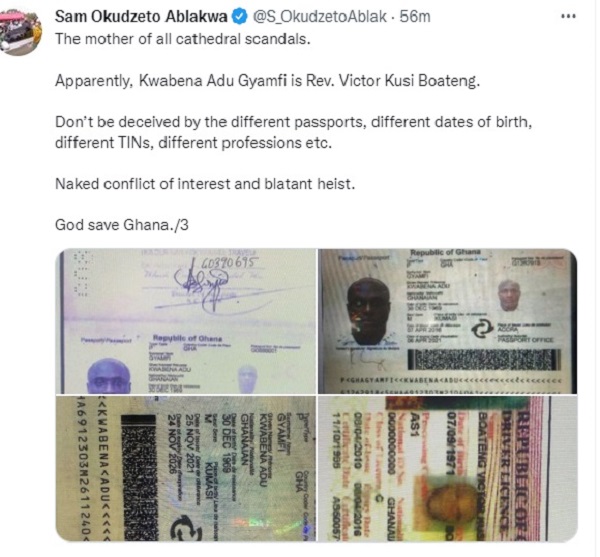 Send your news stories to ghanabanews@gmail.com/kafuisorkpor@gmail.com and via WhatsApp on +233 243359263

ABOUT GHANABA NEWS Ghanaba News is an online media portal established to be a leading online portal to meet the demands of readers and visitors with the growing population of the online community. The site covers news, politics, business, sports, entertainment, and opinions. It is owned by SEY GLOBAL TECHNOLOGIES LIMITED., a privately-owned Ghanaian company. The company is also the owner and manager of the Facebook Page: Ghanaba News, YouTube: Ghanaba News, Twitter Account:@ghanabanews.com, and Instagram Account: ghanabanews and LinkedIn Account: Ghanabanews The news portal has brought news stories and information to Ghanaians and other international viewers who currently make up the large audience online. The website provides the reading audience with a radio and social networking platform in Ghana and abroad. Ghanaba News is determine to become a preferred destination for Ghanaians both home and abroad. Ghanaba News is solely funded by SEY GLOBAL TECHNOLOGIES LIMITED. Ghanaba News complies fully with the company laws of Ghana, and full accounting procedures are in place. We equally comply with the laws on data privacy according to the laws of Ghana. It started as news aggregator and hope to evolve to a producer of original content. Also, it was the first-ever Ghanaian website that aggregated popular Ghanaian local radio stations online. The site is determine to bring many innovations on board in which to become the standard Template for all incoming Ghanaian news websites. It has include video content that covers wide range of topics including interviews with the news makers, public and private organizations, business enterprises, interesting politics issues, personalities in the entertainment and lifestyle industry and voice pops on both social and national issues of concern.
Contact us: ghanabanews@gmail.com
© Ghanabanews
MORE STORIES