The Member of Parliament for Ningo Prampram has described the Ghana Bar Association as a bunch of silly hypocrites.

This comes after the Association in a statement called on the Chief Whip for the NDC caucus in Parliament to substantiate his claims that a Supreme Court Justice called on one NDC MP to bribe the lawmaker to vote for Prof Mike Ocquaye.

“The Bar has read and viewed with great concern, accusations made in the media in recent times with respect to the judiciary.

“The Bar finds the allegations offensive and distasteful. They incite hatred among the public with regards to the Judges, expose them to ridicule and put them into disrepute. Such allegations with respect to the Judiciary undermine the integrity of and erode public confidence in the justice delivery process and may result in lawlessness.

“On Sunday 10th January 2021, the Member of Parliament for Asawase, Honourable Mohammed-Mubarak Muntaka, made an allegation of bribery concerning and touching a Supreme Court judge relative to the election of the Speaker of Parliament. The BGBA finds the comments totally unacceptable and hereby calls on the Honorable Mohammed-Mubarak Muntaka to substantiate the allegation or retract same and apologize to the Justices of the Supreme Court in particular and the Judiciary in general.

“The GBA wishes to state that even though the 1992 constitution guarantees the freedom of speech, that freedom should be exercised with circumspection and should not be used to incite hatred or to subject the Judiciary to ridicule and contempt.”

But reacting to the statement issued by the Ghana Bar Association, Sam George in a post on Facebook described the Association as a bunch of silly hypocrites.

To him, if there any group in the country whose activities and actions are nauseating, it is the Ghana Bar Association.

He expressed shock at the fact that the group has now found their voice when they have been silent when there have been several mishappenings including politicians insulting Judges and people threatening to burn the former President of Ghana John Dramani Mahama. 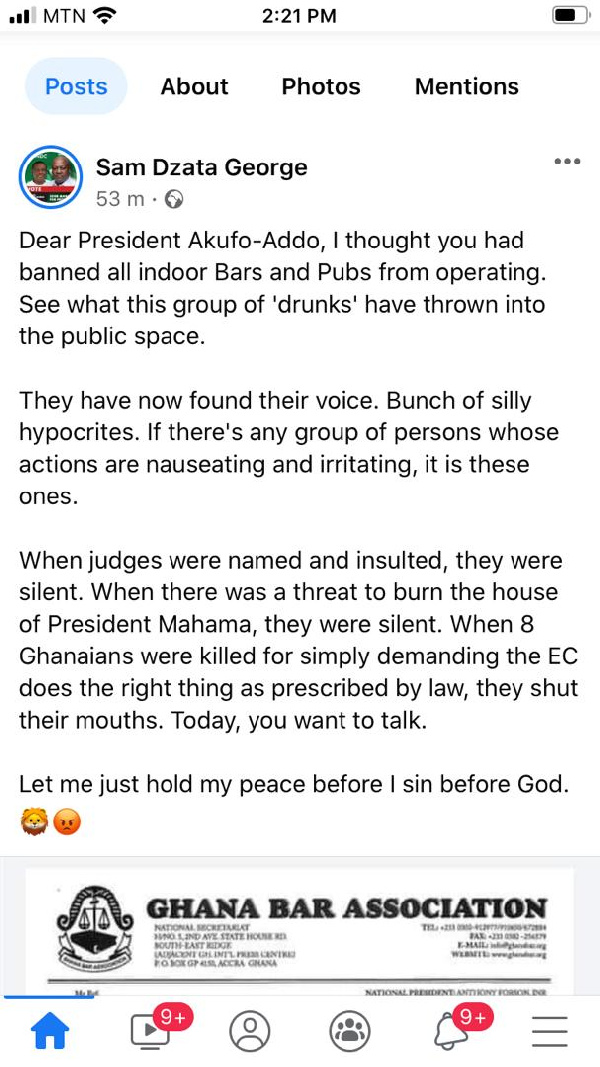 Sorkpor Kafui - January 30, 2021
0
Over 60 Ghanaian lawmakers have defied an order from the Speaker, Alban Bagbin, to test for COVID-19. The speaker has expressed worry over the development...
×