Police have warned persons holding unlawful and spontaneous demonstrations in some parts of the country, urging them to adhere to the law regulating such activities.

Director of Public Affairs, Sheilla Abayie-Buckman, said in a statement issued on Tuesday, December 15, 2020, that recent demonstrations that have been organised on the blind side of police flout the Public Order Act.

“If any crimes are committed in the course of such unlawful demonstrations, all participants are jointly and severally responsible for the crime,” the statement warned.

Since December 9, 2020, when the Electoral Commission (EC) Chairperson, Jean Mensa, declared Nana Addo Dankwa Akufo-Addo winner of the 2020 presidential polls, supporters of the National Democratic Congress (NDC) have been taking to the streets to hold demonstrations.

The NDC leadership and grassroots believe the elections were stolen for the incumbent New Patriotic Party (NPP) and Nana Akufo-Addo.

The NDC says it has evidence to prove its case of a stolen election 2020 verdict, although it is yet to take the matter to court.

The leadership of NDC has also backed its supporters to take to the streets to demonstrate against the results declared in favour of the NPP and President Akufo-Addo.

But the statement from the police said: “The Police Administration notes with concern, recent disregard for laws governing public assembly in Ghana, resulting in damage to both state and private properties. It is reiterated that such assembly including ‘demonstrations’ fall directly under the Public Order Act, 1994 (Act 491),” the statement said.

According to the statement, the Public Order Act places an obligation on persons who desire to hold demonstrations or special events to give notice to the police of such intention in not less than five days before the date of the event.

“It also obliges participants to obey the directions of police officers safeguarding the proper movement of other persons and vehicles and generally maintaining order,” the statement added.

Read the full statement warning the demonstrators below. 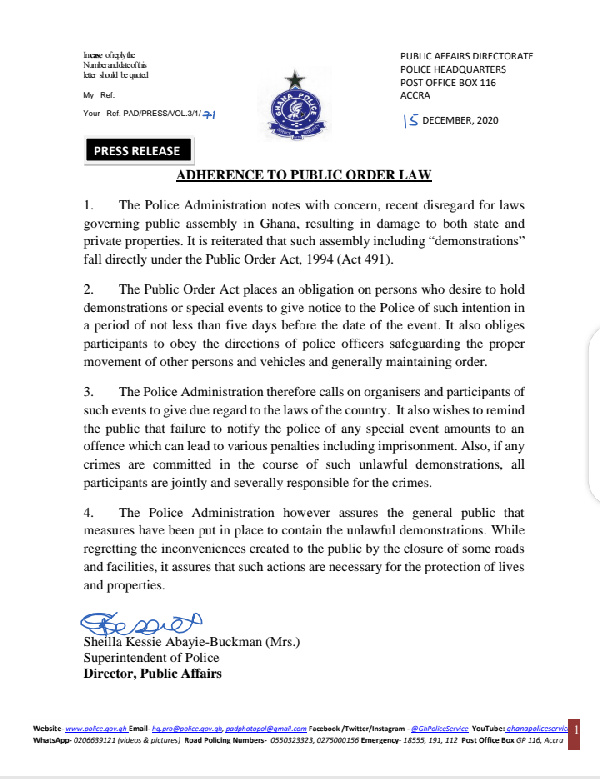 Sorkpor Kafui - February 9, 2021
0
Prof Stephen Kwaku Asare, popularly called Kwaku Azar, has advised the Respondents in the ongoing Election Petition at the Supreme Court to move for a “directed...
×