With this mandatory requirement, should the CDS stay in office for even one more day beyond his 65th birthday in 35 days; this will create a constitutional crisis and a breach which can be explored by the opposition NDC Party or any other body with interest in the Ghana Armed Forces. It will also not augur well for the growth of the Ghana Armed Forces since he is 13 years senior to some of the service chiefs that he sits at Defence Staff Committee with. The practice has been for the CDS to be on the average 3 years senior to his service chiefs so the current state of affairs where the CDS is 13 years senior is worrisome.

At the age of 65, the CDS has virtually given all that he has to offer to the military in terms of energy and knowledge having served the Ghana Armed Forces for well over 47 years. Lieutenant General OB Akwa on his retirement day on 20th June 2020 will be the longest-serving CDS in the history of the Ghana Armed Forces by his years in service and age of retirement. He would have served 47 years in the military and retired at age 65 years.

He will certainly be shown the exit because of precedence. A look at the data on the internet of these noble past Generals will reveal that the retiring age and years in the military of Lieutenant General OB Akwa’s predecessors since the 1992 Constitution were much in line with the Armed Forces Regulation.

Their details are as stated below: 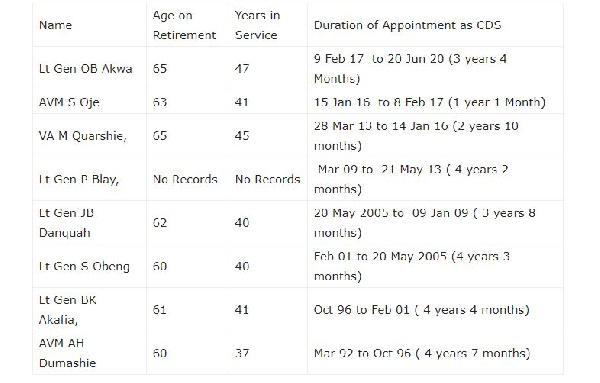 The records indicate that no CDS in Ghana’s history has served more than 47 years in the service and retired beyond 65 years. Indeed no other Ghanaian military person whether a commissioned officer or other rank has served close to or more than 47 years with the military. The race for the CDS Office therefore continues and should be settled by 20 June 2020 or a constitutional crisis will reveal its ugly head. The worrying issue is that the rank and file of the officers and soldiers in the Ghana Armed Forces are all aware and are waiting patiently for the Commander-In-Chief to effect a replacement in line with the constitution to facilitate growth in the military.

Lieutenant General OB Akwa has rendered a worthwhile service to the country and military and it would be honorable for him to exit at this point since any further stay would detract from an otherwise enviable unblemished record. On the contrary, any stay in office for one more day would make stakeholders notably, former CDSs, Retired Generals, Retired Officers and Men, serving Generals, serving Officers and Men ask the rather avoidable question, “What at all is this man looking for in the military”?

Sorkpor Kafui - February 9, 2021
0
Members of Parliament (MPs) breached COVID-19 protocols and organised a party to end a three-day training on processes and proceedings of Parliament for new MPs at...
×