This, the founder of Danquah Institute indicated that it will be used against his uncle Nana Addo Dankwa Akufo-Addo by John Dramani Mahama, the flag bearer of the opposition National Democratic Congress.

“This is the kind of behaviour that affects Ghana’s standing on the index of press freedom. Next thing you know, @JDMahama will be using it against @NAkufoAddo!” Gabby tweeted.

This tweet appears to have incurred the wrath of some section of Gabby’s following, where he was chastised and described as a hypocrite.

“@GabbyDarko @JDMahama and @NAkufoAddo Did Afoko and K Agyapong’s suspension affect Ghana’s standing on the index of Press Freedom?” a follower asked.

Another tweet read: “@GabbyDarko @JDMahama and @NAkufoAddo How are we going to call it when legally elected party executives of NPP were suspended under the watch of the party @NAkufoAddo!

Bernard Allotey Jacobs was suspended for what the NDC describes as his “persistent anti-party conduct”.

Allotey Jacobs’s suspension takes immediate effect in accordance with “Article 46(1), 46(6) and 46(8)(b) of the party’s constitution,” the statement read.

“The matter has been referred to the Disciplinary Committee of the party for further action,” the statement read further.

Read Gabby’s tweets and some more of the replies below:

This is the kind of behaviour that affects Ghana’s standing on the index of press freedom. Next thing you know, ⁦@JDMahama⁩ will be using it against ⁦@NAkufoAddo⁩! 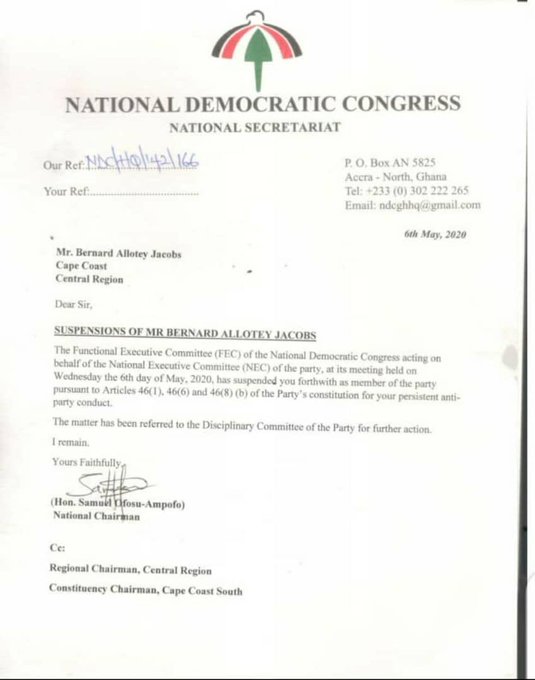 Don’t appoint family and friends into your govt – Lecturer tells...